Working at blood-stained crime scenes may not be everyone’s choice of a career, but for forensic scientists, that blood can provide important clues.

ESR scientists, world leaders in the research of bloodstain pattern analysis (BPA), are now working on a project that aims to ensure the interpretation of those patterns is much more reliable.

The project researcher, ESR scientist Rosalyn Rough, says while DNA can detect who has been at a crime scene, often it’s not who is there that is the issue, but what happened.

“DNA can’t answer that for you. Other types of physical evidence, such as blood stains, can.”

She says bloodstain analysis can help reconstruct an event; how that blood was deposited might establish what kind of activities occurred, and could also place events in a sequence.

“There are a number of typical patterns we see at crime scenes,” Ms Rough says.

“These include drip stains, impact patterns, which are caused when a bloodied surface is struck, which would suggest an assault – as well as cast-off stains, which is when blood comes off a moving object such as a weapon.

“That might indicate there’s been some swinging involved – so all of these things help to establish what happened at a scene and help reconstruct the events.”

She says at the moment there is some subjectivity to blood stain interpretation, which can mean that analysts have different opinions and that in turn can lead to evidence being contested.

“So what we’re trying to do is to reduce that ambiguity by hopefully finding some characteristics that a computer may be able to find and measure for us.”

Her goal ultimately is that ESR will have some methodology that enables the production of good digital images of a bloodstain pattern at a scene that can then be put through a software programme, hopefully providing some metric data that would either definitely classify the pattern or give some probability about what it is most likely or not likely to be.

She says New Zealand is a world leader in research of BPA, largely because it’s scientists who do the work.

“In a lot of other countries the BPA work is done by law enforcement agencies who do some training, but don’t necessarily have a lot of scientific background and that’s something we’re trying to change by bringing that scientific element into it.

“And because we’re scientists at ESR, we have the ability to research and develop good scientific methods. On top of that we’ve also had a good research group working on BPA for several years.” 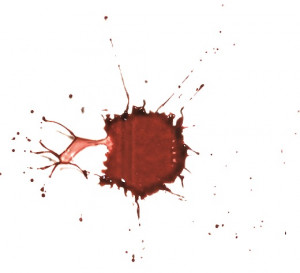