Antimicrobial resistance (AMR) is an ongoing global concern and a complex problem spanning the fields of human health, animal health, agriculture, and environmental health. AMR is a natural phenomenon and microbes evolved antimicrobials prior to the use of clinical antibiotics. However, since humans have produced and used antimicrobials on a large scale, the development of AMR has gone up very fast. A recent PM Science Report on AMR(external link) pinpointed a need for increased surveillance of AMR in animals, plants, and the environment.

Scientists in the Health and Environment group at ESR are working to help fill this knowledge gap by investigating the presence of AMR in wastewater. One example is a project started three years ago at the wastewater treatment plant in Christchurch. An intensive study was undertaken to sample wastewater at the treatment plant over three days. The team sampled the wastewater at three stages: the raw sewage going into the plant, the effluent (the treated wastewater after it has moved through the plant), and oxidation pond water prior to discharge. The team analysed these samples in the lab for certain resistant microbes and for AMR genes. To get an idea of the amount of AMR in wastewater and how it changes over time, the team continues to collect monthly samples. These data will help scientists understand if and/or how AMR in wastewater has changed after the borders were re-opened in 2022.

The main goal of the project is to investigate how well the wastewater treatment plant can remove AMR, and whether what’s being released downstream could be a risk to human or animal health. This is easier said than done, because there isn’t just one pathogen or resistant gene to find. “There are a lot of different bacteria that can develop a lot of different resistance strategies,” says ESR Senior Scientist and co-lead on the project, Dr Isabelle Pattis. Bacteria develop AMR and can pass genes between different bacteria, as well as to future generations, so there are many different resistant microbes and AMR genes.

This study may also help to inform population surveillance of AMR. “We have good surveillance of clinical isolates, but we don’t know what the carrier status is in the general population,” says Isabelle. Since healthy people can carry AMR microbes, but don’t fall ill from them, these data points aren’t often captured by testing in clinical settings. Sampling wastewater may help to fill in these gaps. Preliminary results from the project show that there are both AMR microbes and genes present within both the raw sewage and in the effluent, but there is a considerable reduction of AMR microbes and genes after wastewater treatment. Isabelle adds that more research is needed to determine “if the AMR in treated wastewater discharges in Aotearoa New Zealand is a problem. It's still not clear what level of AMR in wastewater poses a risk and how risk is quantified.” By providing baseline measurements of AMR in wastewater, this research is a first step to meeting this challenge. 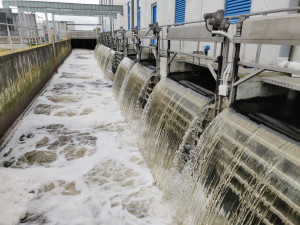